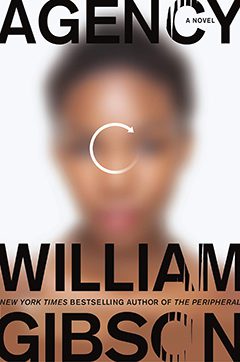 A little off topic. Gibson though is one of our greatest living writers who’s always had a handle on the future, even if it is somewhat dystopian.

Hired to beta test a new AI called Eunice (think a cross between Alexa and Google Glass on steroids), “app whisperer“ Verity realizes that she is working with some bleeding-edge tech. Eunice, instantly capable of face recognition, orders coffee at the local cafe and pays for it from Verity’s PayPal account. But that is just the beginning of what she is capable of. Eunice is an “autonomous, self-learning agent,” a “cross-platform, individually user-based, autonomous avatar . . . digital mini-self.” She is sentient, self-aware, and from the future. Eunice has different plans for Verity, and the two go off the grid where they eventually are contacted by Wilf Netherton (last seen in The Peripheral, 2014) from an alternate-future London. Gibson delayed Agency’s publication following the results of the U.S. presidential election, envisioning a recent past where, owing to meddlers from the future, the president is a woman, and the Brexit vote failed, but nuclear war is probable. Netherton, now sober and happily married, is hired to assist Verity to avert disaster. Gibson blurs the line between real and speculative technology in a fast-paced thriller that will affirm to readers that it was well worth the wait. [HIGH-DEMAND BACKSTORY: Gibson wrote about the internet before there was an internet; plenty of readers will be anxious for his take on AI.]

If you don’t know Gibson and his work here are a  couple of  videos to watch.He has invented our age as much as any technologist