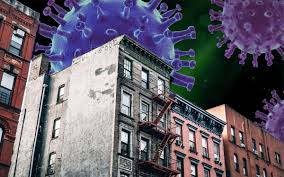 Our contracts and the law surrounding them do not account for systemic risk. I believe that the common law has done a good job of balancing risks between parties (or rather a not-terrible job: it is difficult to determine whether law is truly good, merely whether there could be worse). Parties are generally held to their obligations, and there are limited situation that they can get out of them, such as misrepresentation, fraud, implied terms, unconscionability, duress, frustration, and undue influence to name a few.
But these contractual escape mechanisms do not consider systemic issues. That is whether the upholding of a contract could do something greater than shift obligations losses or gains between parties, but instead deal wider damage to the societal or economic system.

For example, many business such as pubs, gyms, and cafes have been forced to close in response to COVID. Many more will be closed in the coming weeks. These businesses have been rightly forced closed for the broader benefit of society. However, consider the contractual effects. They will still be obliged to pay rent – it is unlikely that the leases are frustrated under the classic understanding thereof. Nor do most (or any?) leases account for pandemics. And the landlords will find it difficult to give rent-free periods when they are still required to pay the interest on the bank loans that they have taken out for those properties.
This is the way these contracts are supposed to work: the business tenant takes the upside and downside risk, and the landlord and financier have fixed returns. If things go badly, then the business owner goes bankrupt, and the landlord and financier can recover their position. This is how losses should be distributed – even in a large and painful economic downturn.

The problem occurs when there is an extreme event. If a large proportion of businesses are bankrupted, then the landlords will not be able to source tenants when business are able to open again. Landlords will be forced to sell vacant property, and its price will crash. The financiers will then bankrupt the landlords but will themselves face great losses as the assets they secured loans against tumble in value. This was seen during the subprime mortgage crisis – a crisis that is a mere fraction of the present COVID pandemic.

As we saw during the GFC, the systemic issues caused a lockup of the financial system. At present, the risk is that in 6-12 months time, banks suffer such catastrophic losses that they either cease to function or require nationalisation.

The way of reducing the probability of a systemic failure is a sharing of losses in this scenario (and only this scenario). That is, landlords irretrievably forfeit the rent for premises that have been forced to shutdown, and banks forfeit the interest on those premises. This will, of course, pass losses up the chain but will spread it such that when the lockdown restrictions are lifted there will be some capacity for business to return. Rents and interest can then resume.

Under my proposal, the banks would actually save themselves huge losses (or total destruction) by accepting immediate losses. Given the important role that banks play in maintaining our financial and economic system, we do not want to see them destroyed – that would have extreme widespread economic and societal consequences.

I believe (perhaps somewhat naively?) that the common law has the flexibility to evolve to meet new challenges as they arrive. It is my view that the law of frustration (or perhaps something else) can be extended to cover the circumstances where the upholding of a contract during a disaster would cause systemic risk.

That is, only upon the occurrence of an extreme disaster, and where it can be shown that there is a broader systemic risk, will contracts be frustrated to the extent necessary to remove the systemic risk.

Or perhaps this is the time for legislation to that effect. It is a national imperative.